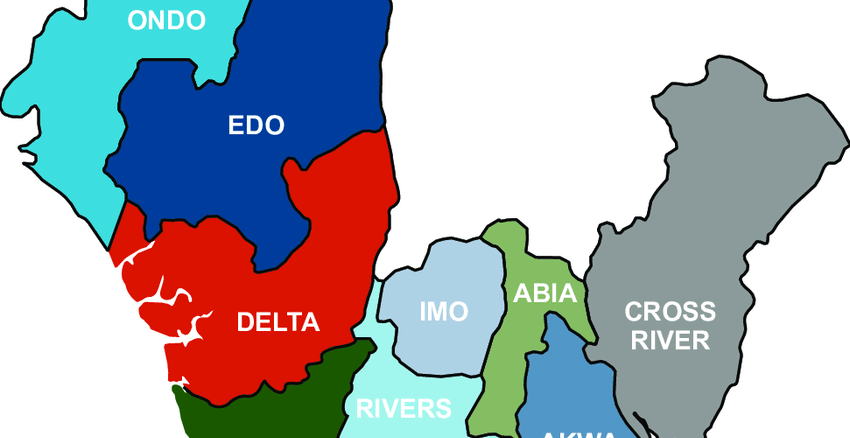 The Niger Delta or the delta area of the River Niger is a region located in the southern part of Nigeria. It sits directly on the Gulf of Guinea on the Atlantic Ocean in Nigeria and is renowned for its rich deposits of Crude Oil which powers the Nigerian economy.

A densely populated area, it is sometimes called the Oil Rivers, a name derived from its history as a major producer of palm oil – particularly during the colonial era.

Some of these ethnic groups are further divided into clans (such as the Kalabari clan of Ijaw extraction) with their own distinctive languages; making the region a land filled with rich, diverse cultures and heritage, including numerous kinds of foods and festivals.

Given its location and climate, farming and fishing are traditional mainstay occupations of the people. Apart from this major occupation, the Edo people of Niger-delta are known for their crafts and brass work some of which is said to date back from the 13th century, and for its ivory and wood carvings.

SOME FESTIVALS HELD IN THE REGION

Myriads of annual festivals are held in Niger Delta each year to mark different occasions, celebrate different milestone points in the year, or celebrate and thank the gods. This includes festivals like:

Awankere Juju festival to give sacrifices and appreciate God for good harvest as well as good returns from the Niger River;

Ikwerre, Kalabari, and Okrika festivals celebrated in honor of the water spirits in their region;

Igue festival led by the Oba of Benin kingdom, to usher the Bini people into the New Year and offer thanksgiving for the outgoing year;

The Niger-delta Festival for Arts and Culture which showcases the region’s rich cultural heritage;

And, others like the Ukwatta Festival and Okere/Okiro festival to mention only a few.

It isn’t just the multiple unique festivals and cultures, or the rich produce of its land and water bodies that makes the Niger Delta region appealing, it is her people, who are peaceful, respectful, hardworking and they treat visitors with so much awe, respect, and hospitality.

SOME TOURIST AND VACATION RESORTS IN THE NIGER DELTA REGION

For fun-loving people, recreational facilities and opportunities to unwind are never far away from the Niger Delta people. While many of these are small and local, there are also a ton of tourist attractions, many of which boast pristine beaches and/or manifold wildlife, such as:

The Niger-delta region of Nigeria is indeed a beautiful place to be.