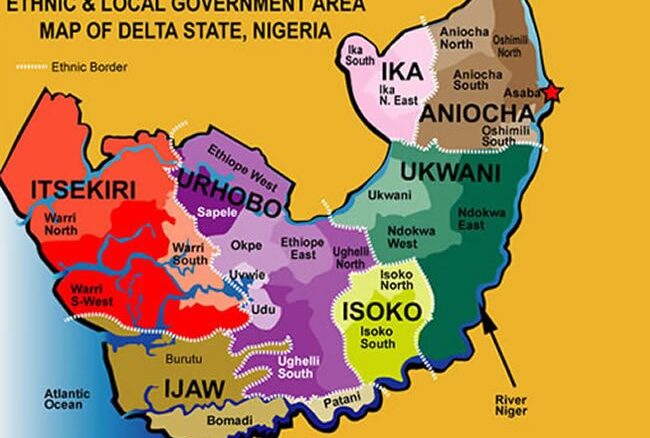 Created 30 years ago by the IBB regime in Southern Nigeria, Delta State is known for its heavy production of both the black (Crude) oil and the red (Palm) oil; and was a part of the old Bendel State alongside Edo State.

The state is a union of the old Delta Province and the Anioma region which were both part of the old Bendel State. It is one of a few states with two capitals – the provincial capital and seat of government in Asaba, and the commercial capital of Warri. Both these cities have their own airports, with the one in Asaba enjoying a higher status as an international airport.

Delta State is also different from most Nigerian States with its multi-city nature. Asaba, Warri, Ughelli, Agbor, and Sapele are the most prominent cities, with other townships like Oghara, Ozoro, and Abraka. Many of these cities/townships are separated by vast swathes of uninhabited land, ensuring they’re distinct entities.

Delta State is covered with a large body of water, thus making fishing and farming the centerpiece of the people’s livelihood. However, with minerals like crude oil abundant throughout the land, the past few decades have seen more attention paid to these resources than to fishing and farming, the traditional occupation of the Deltans. Other minerals present in the state include: industrial clay, silica, lignite, kaolin, tars and limestone; thus, making it remarkably blessed among other Nigerian States.

The Deltans, like others, strongly believe in God (OGHENE), deities and the importance of revering ancestral spirits.

We cannot fully talk about delta state without mentioning some historical and cultural tourist centres like:

The Araya bible site, believed to house a copy of the holy bible which descended from heaven.

Falcorp Mangrove Park and Warri kingdom royal cemetery which has served as resting place of past rulers of Warri kingdom.

Notable of recognition is the high sense of dressing among the deltans especially the women who are known to be exceptionally fashionable. The difference in their mode of dressing is said to carry from one ethnic group to the other.

Delta, similar to other Nigeria states is prosperous with both human and natural resources that are yet to be utilized.